Nothing beats a good ghost story on Halloween, and our planet is chock full of ’em: UFO sightings in Transylvania, murders on luxury cruise ships, and spirits wandering the halls of British castles. No matter where you’re traveling, you’re sure to find some sort of haunted site, as well as a ghost tour to go along with it. But even if you’re not a fan of paranormal activities, some of the most spectacular locations are still worth your time, whether for their beautiful architecture, jaw-dropping locations, or fascinating history. Here are the 12 most haunted places in the world that are beautifully scary.

Built in 1888 to encourage tourism and sell train tickets, this chateau-style hotel sits pretty by the Rocky Mountains in Banff National Park. But it gets a tad more Gothic once you get inside—and we aren’t talking about the architecture. The Calgary Herald has reported several resident ghosts, including a bride who supposedly fell down the stone staircase during her wedding. But there’s a less tragic spirit, too: Sam the bellman, who worked at the hotel until 1975 and claimed he’d come back to haunt the joint. His spirit supposedly pulls shifts helping people with their bags before disappearing.

The Stanley Hotel’s stately Georgian architecture and world-renowned whiskey bar have lured travelers to Estes Park since opening in 1909, but the hotel reached new levels of fame after inspiring Stephen King to create the The Shining’s fictional Overlook Hotel. That eerie association aside, many other ghost sightings and some mysterious piano music have been connected to the hotel, and the Stanley Hotel leans into its reputation with nightly ghost tours and psychic consultations from the in-house Madame Vera. 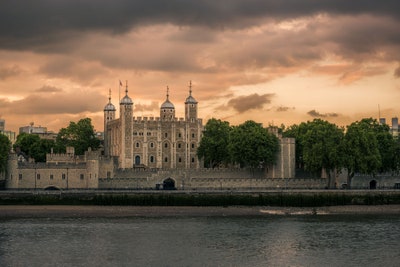 Built by William the Conqueror in 1066, this uncompromising fortress has had many functions. But it’s best known for its bloody history as a prison and execution site—Henry VIII famously ordered the execution of two of his wives, Anne Boleyn and Catherine Howard, here. It’s also where two young princes were imprisoned after the death of their father, King Edward IV; they disappeared shortly after in 1483, and their remains weren’t found until 1647. Unsurprisingly, ghost stories of the Tower’s victims—and ghost tours through Historic Royal Palaces—abound.